In this post I'm going to show you how to generate a radial gradient using HTML5 canvas pixel-wise API. As mentioned before the API actually includes a way to generate it without any fuss. My implementation differs a bit from the native gradient. It handles certain boundary cases in a different manner and is more generic. The approach could easily be extended to allow more complicated gradients to be rendered.

This time I will start out by explaining the math behind my approach first and move to the code after that.

I decided to mimic the API of the original gradient as I found it quite versatile. This means that it should be possible to define a radial gradient by defining it using two circles and their colors. The gradient is then drawn using this information. The following image shows the basic idea: 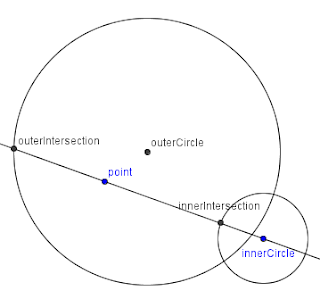 In order to come up with a gradient, there has to be some way to interpolate between values. In linear gradients seen before this was quite easy. In the simplest case all we had to do was to vary interpolation factor based on some coordinate (ie. in order to come up with a horizontal gradient, the factor may be derived based on the x coordinate of the current pixel and its relation to the image width).

I will show how this idea translates to some actual code next:

As before I used a couple of library files and extended them to fit the demands of this particular task. You may find them here: graphics.js and math.js .

In addition to the idea above I decided to crop the gradient so that it's contained within the outer circle. Hence the check for containment (!outerCircle.contains(point)).

Here's a sample render of the result: 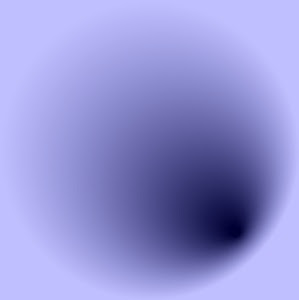 Compared to the native radial gradient this implementation is slow. It does allow several interesting tweaks to be made, however. The basic idea should work with other shapes as well.
Labels: canvas, gradient, html5, javascript, programming, tutorial
Newer Post Older Post Home