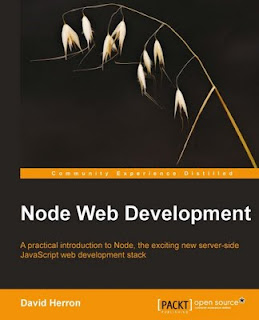 Node.js, or just Node as I shall refer to it, is perhaps one of the most hyped web development platforms at the moment. Compared to established solutions, such as Django or Ruby on Rails, it provides a lower level approach to web development. It utilizes Google's V8 JavaScript engine renowned for its performance.

Node is not just about a different kind of approach to development. npm, Node Package Manager, is probably one of the main reasons for its surging popularity. This popularity is also visible in the increasing amount of documentation available.

Node Web Development by David Herron is one of the newcomers on the Node documentation scene. It is a book aimed for people that have already some experience with web development in general and wish to make the leap to Node. I think it manages to reach this goal amicably. It is not a thick book given it has only 172 pages. Nevertheless, it succeeds in providing enough information for one to get started.

I'll cover the book and its content in more detail next. The free chapter available provides a nice overview of Node modules for those interested and gives a nice glance at the book itself.

The book starts out by describing the basic idea of Node. You'll learn answers to important "whys" in this chapter. The rest of the book focuses on "hows". I think this is a good way to start a book like this especially given the special nature of Node.

The second chapter shows you how to set up Node on your computer. Given I had it already installed I mainly read through it. The material is solid and contains some interesting points (how to set up a proper server, how to deal with threads).

The third chapter focuses on Node modules. The examples provided are clear and easy to understand. I also appreciated the part on npm.

The following chapters (4, 5, 6) focus on building various applications including a math wiz app aimed for kids, HTML server, HTML client and a notes application. Each of these demos showcases some specific aspect of Node. For instance the math wiz app starts out really crude and is then developed into a nicer shape using Connect and Express. The notes application gives some idea of how to hook up a database (SQLite, MongoDB).

It would have been awesome to have some kind of "where to go next" kind of chapter at the end of the book. Now it's up to the reader to figure out which packages to use with Node. In a way writing one could have been quite difficult given that Node and its packages seem to evolve at quite a pace.

If you need a good book on Node, this is a good candidate to pick. Especially the ebook version seems quite affordable at the moment. Even if you don't intend to use Node for anything serious, just having some idea of how it works can probably enlighten your world a bit.
Labels: book review, javascript, node, packt, programming, web development
Newer Post Older Post Home