Places to Visit in Western Sicily

I did a little holiday trip on western Sicily around a week ago or so. The weather was just perfect (around +27C for the week) and there were plenty of nice places to see. I thought it might be a nice to write a post about this experience.

Compared to Garda region, which I've visited before, western Sicily was quite different. You could say it's less "touristy". This doesn't have to be a bad thing, though. There's definitely a lot to see around there. Too much to see just in a week.

In this post I'll cover some highlights of my trip and provide some pointers for people interested in the region. I'm definitely not an expert on the subject. Despite this I hope to give you little insight on the subject should you decide to travel there.


View Interesting Places in Western Sicily in a larger map

The map above contains a set of places I visited. I've also included a few that might have been interesting to visit. As you can see, my ventures focused mainly on Trapani. I did visit Favignana, the biggest of Egadi isles, Erice, San Vito Lo Capo and Marsala during my stay there, though.

On retrospect it might have been a good idea to rent a bike as the rents were cheap (just around 5 euros per day). The traffic was quite chaotic at times so perhaps it was a good idea not to.

It might be interesting to tour the area using a road bike. In fact there are specific active tours that do something like this. Unless you go to the mountains, the roads seemed nice and easy to me. Cruising along the coastal regions should be quite enjoyable even with some baggage.

I stayed the whole week at Trapani and did small excursions from there. The central location of Trapani makes it an ideal place for this kind of touring. The public transportation system works quite well. You do have to be careful with the timetables, though. In Italy they have some kind of "siesta" period that kind of screws up the schedule (at least for a Finn). On the other hand this means the shops are open longer. 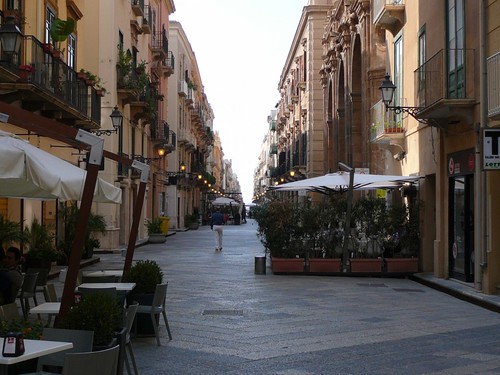 The picture above shows one of the nicest shopping streets in Trapani, Via Nunzio Nasi just in the middle of the peninsula. There are plenty of others though I find this one the most idyllic. Besides shopping streets, there are many other things to see in Trapani, some of which I've listed on the map above.

Of these I would like to highlight the fish market and the regional museum, Pepoli. The fish market, although not very big, is quite an experience. It's apparently open on Wednesdays. You certainly won't forget that visit! The Pepoli museum is filled with invaluable treasures that give you insight to the local history. It's difficult to digest all that in just one brief visit. There's just so much to see.

Even though Trapani is a nice place, I did have some issues with its traffic. There was just too much of it. There were relatively few pedestrians and cyclists around. You might expect people to use more muscle powered means of travel in a pleasant place like this.

The public beaches weren't particularly clean either. There was litter, and more dangerously glass, around. If you decide to swim around here, do use some kind of swimming sandals!

Despite these issues Trapani is a good place to launch your little expeditions from. It's pretty close to many interesting places as we shall see in a bit. 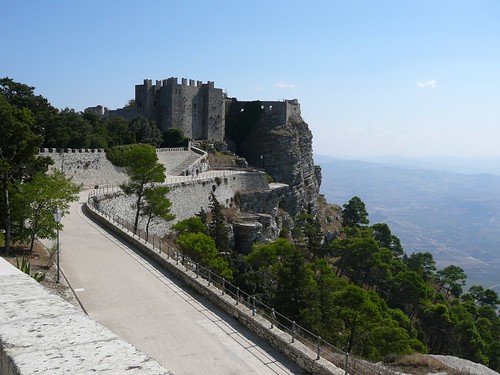 Just next to Trapani you'll find Erice, a small village on top of mount Eryx (~750m). It's a real tourist trap given they've built a nice cable car route there. It takes around seven minutes to reach the top. Note that its opening and closing times vary. As far as I know, the only reliable way to figure out when it's open is to visit the station. There are some holidays that might mess up with the schedule. In addition weather conditions might affect this.

Erice itself is just an amazing place. The center is filled with restaurants and such. There's also a museum and a few chapels. The main attraction of the place is the castle pictured above. The sights are just stunning. Too bad the weather was a bit misty. Overall this was one of the highlights of the trip. 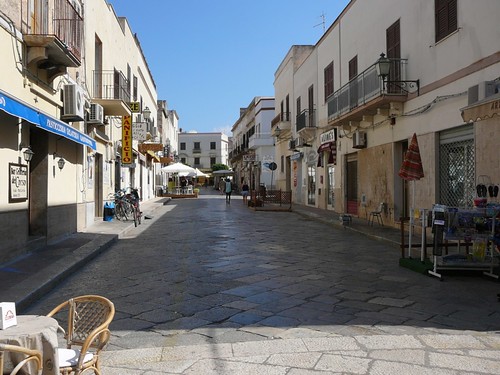 Favignana is biggest of the Egadi (or Aegadian) isles. In addition to an idyllic town center pictured above, you'll find plenty of beaches there. It's easy to get there from Trapani. The trip costs around twenty euros per person. In addition there are guided tours available that cost a bit more but allow you to see places you might otherwise miss. Apparently some people hire local fishermen to show them local sights by boat.

The trip to Favignana takes somewhere around 20-40 minutes depending on whether or not it stops at neighboring Levanzo along the way. It was a really smooth ride. 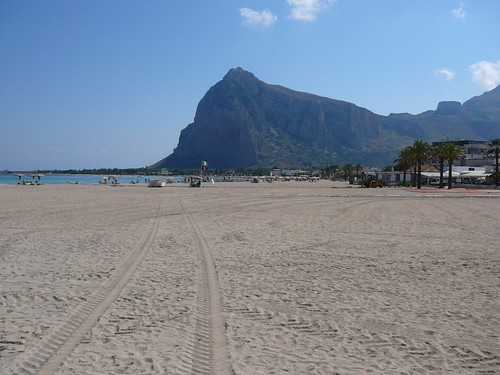 I originally meant to visit San Vito Lo Capo briefly while enroute to the nature reserve of Zingaro. As luck would have it, the day I visited there was some kind of local holiday. No bus nor taxi would drive to Zingaro. This wasn't a bad thing given San Vito is a really nice place! I was particularly stunned by the beach. It was also pretty peaceful, especially compared to Trapani and its traffic.

Apparently the place is some kind of cous cous center of the world. They hold an annual cous cous festival at the end of September. Some remnants of the festival were still visible while I visited there. That might be a good time to visit San Vito.

It seems to me that San Vito is one of the hidden jewels of Sicily. I certainly wouldn't mind spending a week or two there just to chill out. It is important to note that Palermo is quite close to San Vito. That's definitely one of those cities that ought to be interesting to see. 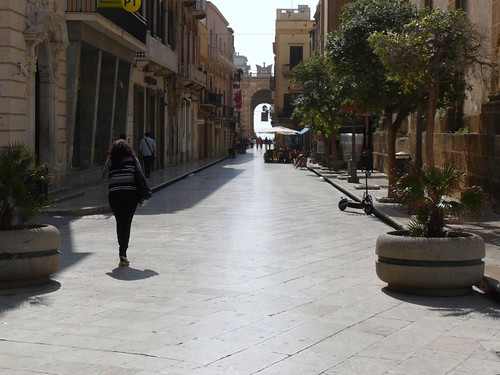 I spent only a few hours at Marsala. The train trip from Trapani took somewhere around half an hour. It cost somewhere around five euros there and back so that wasn't a bad deal. I've heard horror stories of Italian railway system. This time I had no problems whatsoever, though.

During my time at Marsala I walked through the main shopping street, visited some coastal parks and discovered a great little bar at Comune di Marsala. The place is definitely worth seeing, especially if you love architecture. There's plenty to see for archaeology peeves as well particularly due to a museum dedicated to the subject.

It seems to me October is an excellent month to visit Italy. Even then it can get quite warm over there. I suspect even later months might be ideal. Service-wise the last week of September might be a good pick. At least in Trapani, they had just revised their schedules when I arrived there. This probably wasn't a major issue, though.

Even though I had my issues with Trapani, it was quite a nice place. I was particularly charmed by Erice and San Vito Lo Capo. I know the east part of Sicily contains some major sights including Etna. It would definitely be interesting to visit there to see what kind of contrast it provides to the west.

I've made a small set of photos available that might give you a better idea of the region. There are plenty more available at Panoramio.
Labels: italy, sicily, travel
Newer Post Older Post Home