Packt has a specific line of books known as Instant. I reviewed one of those, namely Instant Zepto, a while ago and wasn't totally impressed. The value just wasn't there. This time I'll try again with another book of the same line. 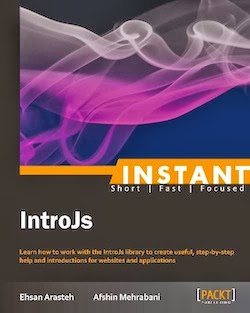 I was aware of the library before reading this book. It happens to be the leading entry at its JSter category of tours and guides so they must be doing something right. Technically the library isn't that complex but it solves a tangible problem.

These kind of libraries make it easier to explain what your site does and help users adopt new functionality. Using one can help you to optimize conversion. They aren't used that commonly yet but every once in a while you see some refreshing use.

Does a library this small need a book? A decent programmer can work out the details by examining the available examples and documentation. In Intro.js case you have merely some examples available but given the library is not that big itself, it is fast to skim through. You could say this book fills the need for documentation if there's one.

The book is quite short as you might expect given it's "instant". Out of 48 pages roughly 30 have been dedicated for content. Within those pages you'll find a beginner friendly overview and introduction and get to understand the basic ideas behind the library. In addition integration with frameworks such as Rails and Yii are discussed. There is also some information on localization and RTL (right-to-left).

I probably would have left some absolute basics out. For instance building a project should be trivial. And even if it is hard, it should belong to developer documentation. I was also a bit stymied by the fact that event handling is discussed twice. I would have cut some of that out and spent the pages on something more important.

As usual the book came with a collection of code examples available as a separate download. Sadly they were pretty useless in this case. Only one example was complete enough to run "as is" and even then you needed to download and set up some dependencies on your own. This was bit of an issue even with "Instant Zepto" but in this case the issue is somewhat pronounced. I am certain the authors are capable of more.

Formatting of the book was alright expect for a bit low quality images and missing syntax highlighting. It is clear the authors know what they are talking about. The text was clearly written and easy to consume.

Of course a couple of questions remain. Should a book like this have been written in the first place? It feels like something that you could expect to find as a part of library documentation. In this case there would be a great incentive to keep the documentation up to date. APIs change and libraries evolve. Will the book stay current?

Given the relative simplicity of the library it isn't that hard to learn to use. The value isn't there at least for me. I might buy something like this on impulse (say $5 ebook). The current price range ($10) feels a bit much.

In case you are absolute JavaScript beginner and you don't have much time to study and just want to get something done, perhaps the value proposition is there. For an expert programmer it is a bit so-so. You can get a real book with lasting value for $10.