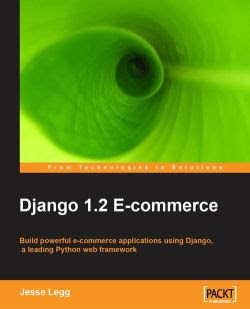 This time I will take a look at Django 1.2 E-commerce by Jesse Legg. It's his first book so congratulations for that! I haven't dabbled a lot with e-commerce before so I expected to pick a new trick or two from the book. I was particularly interested to see how to handle transactions, pricing and such. I think the book managed to reach my expectations, to some extent. At least I have some material to refer to should I need to build an e-shop or so.

The main thing that bugged me about the book was the quality, or the lack of, editing. There were numerous little errors, particularly in the code examples, that made the experience a bit tedious. Companion code provided was split per chapter as usual. I'm not sure if I agree with the approach, however. It's easier for me to dive into code and read it as a whole than to piece it together before doing that. Perhaps they ought to provide both final and "bit by bit" version of the application built.


The good:
The bad:
The ugly:
Verdict
Overall the book managed to deliver. The amount of errors in this edition detracts the value of the book, however. I am sure that if I ever have to build Django based business online, the book is going prove its value. I believe the book should have something to offer all the way from Django beginners to more experienced developers trying to grok their way into the world of e-commerce.
I noticed Apress has published a similar title, Beginning Django E-Commerce. It appears to be priced similarly as Packt's offering. For about the same price it packs in around 70 extra pages. Also by the looks of it, the site built in the book looks decent to me (perhaps the style could be tidier :) ). I glanced briefly at their supplemental material and it appears to contain the whole site as is (big plus).
You can get a better idea of the book by taking a look at the table of contents. There are also two sample chapters available online. One is about constructing a site in 30 minutes (pdf) while the other one discusses how to generate PDF reports using ReportLab both of which you may find useful.
Labels: book review, django, e-commerce, packt, python, satchmo
Newer Post Older Post Home